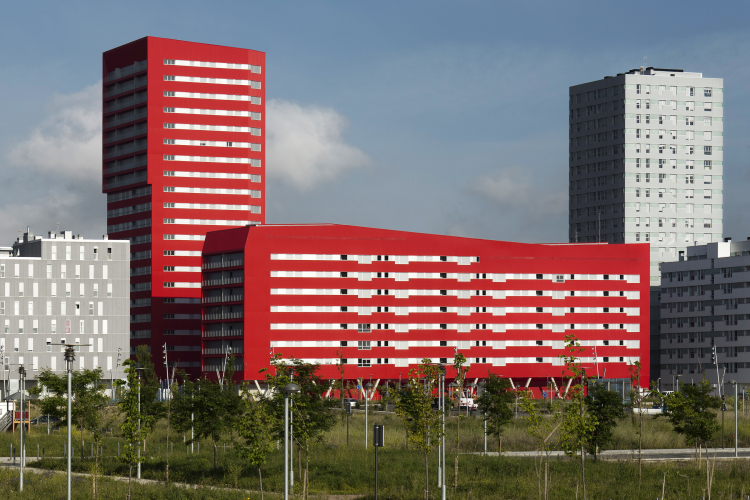 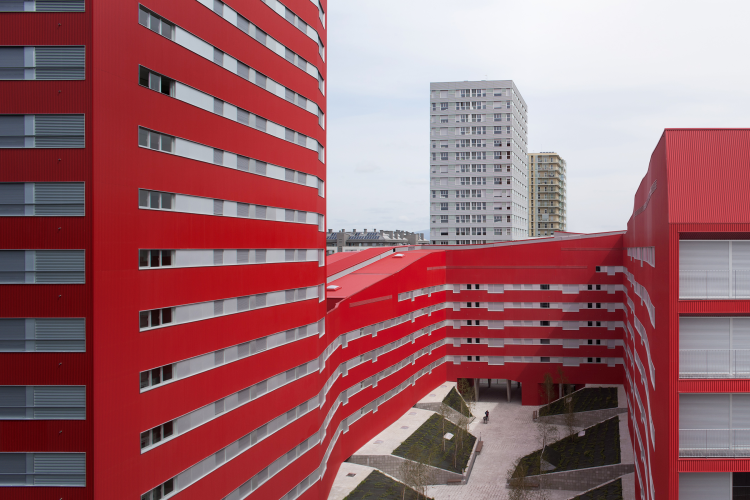 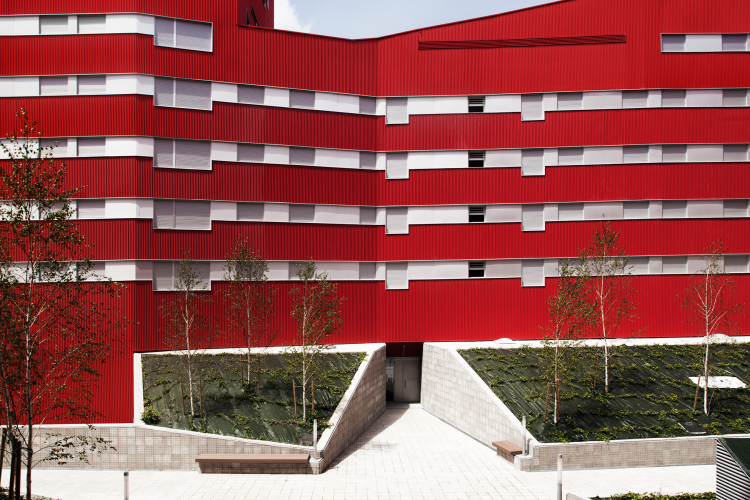 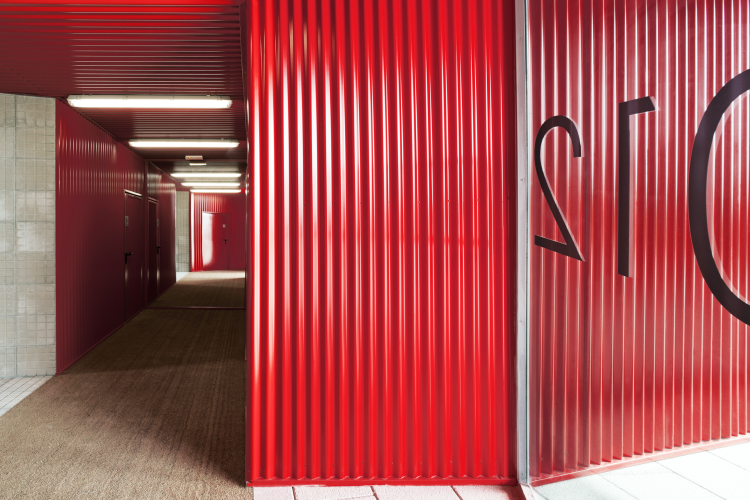 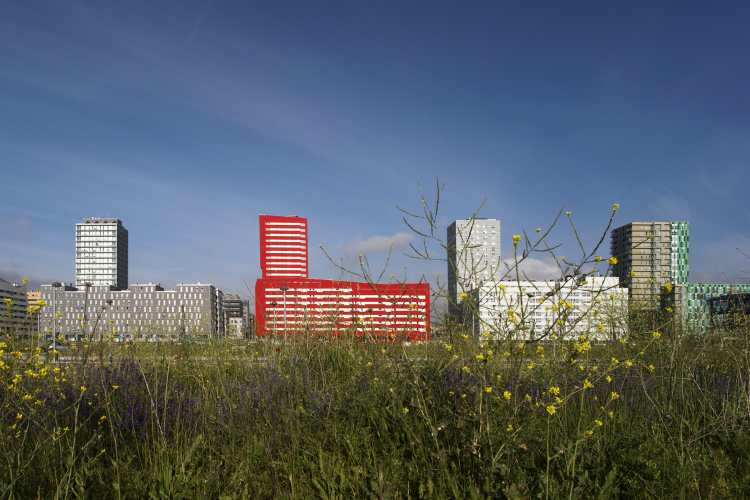 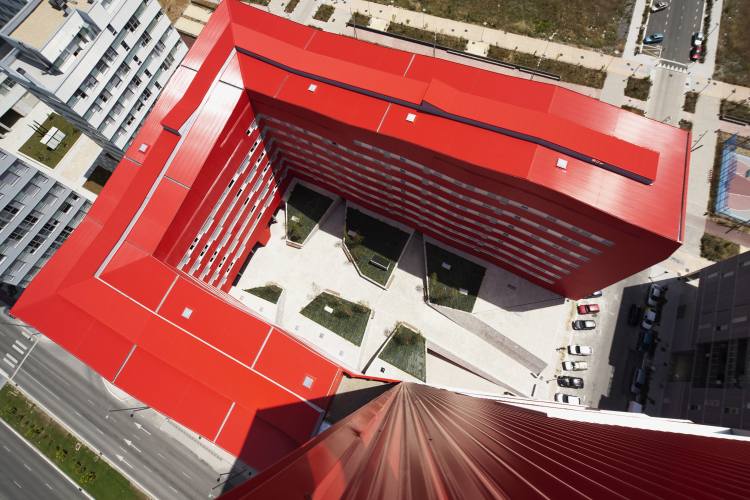 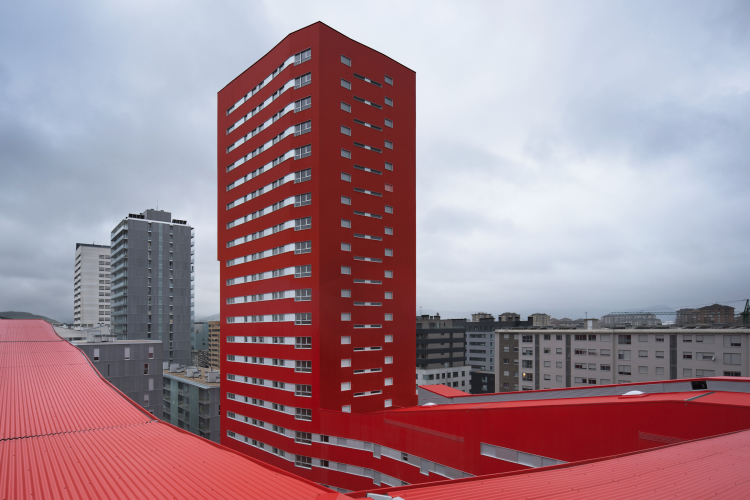 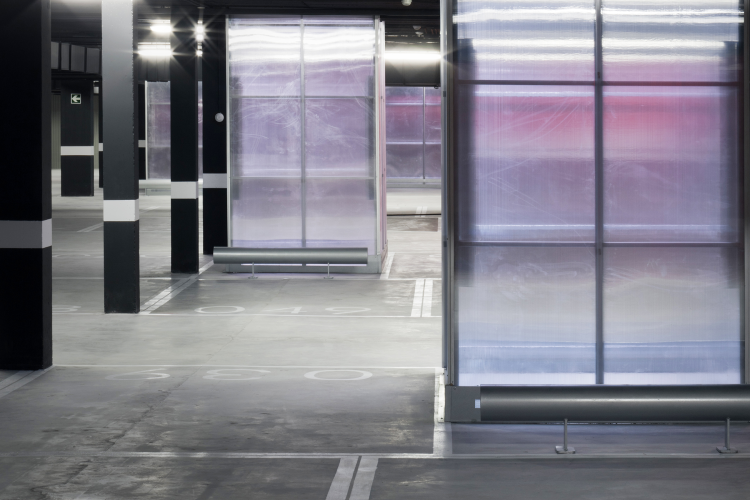 Located in the Salburua neighbourhood in Vitoria-Gasteiz, the 242 social houses are placed in a building with a twenty-storey tower in its South-West end and a U-shaped continuous block with a changeable height from four to seven floors which closes the site. In the courtyard, the linear and continuous guideline of the plan is kept as perceiving it as an extension of the urban space. Entrances of the whole promotion and nine trade premises are placed in the ground floor. The two basement floors occupy the whole space of the plot and are used for garages, junk rooms and technical rooms.

The building is designed according to habitability premises, energy saving (NZEB, A calification) and economics of common areas, prioritizing double orientations of dwellings and the best sights to the surroundings. To get the maximum level of sun lightning in the courtyard, the height of the building to the South is limited to the maximum. Rooms of dwellings face to this garden courtyard, while living rooms and kitchens do to most urban streets. This way, the public side of the house is linked to its urban equivalent and more private part of it does to the courtyard as a place of silence.

Given the view of the rest of the towers to the deck of the lower block, a significant effort has been made in order to deal with delicacy its appearance considering it as the fifth façade of the building. All facilities are grouped in the middle and are vented through a continuous grille thus avoiding the presence of the usual chimneys typical in housing roofs.

Regarding the type, it should be remarked the treatment of space as if it were a loft in which the centre is occupied by the nucleus of wet rooms, served by a single air shaft, which is painted in black didactically showing the operation of the facilities.

The compactness of the building, its important insulation from the outside, the low transmittance of windows and the efficiency of its facilities make this a building with an A energy rating label (8.7 kgCO2/m²·year).

It is noteworthy the installation of a complementary cogeneration system to the conventional thermal production of a centralized boiler with individual management. This highly efficient system generates 70 electric KW, and a thermal power of 109 kW in a single process using the residual heat produced by the engine cooling and exhaust fumes to cover the entire demand of DHW and a part of the building heating. As a result, a considerable reduction in CO2 emissions is achieved and, besides, the fact of producing and managing the own energy allows considerable savings on energy bills of the users.

This promotion has been selected by the European Federation of Public, Cooperative & Social Housing (CECODHAS) to be included in the European project POWERHOUSE, as a representative example of Nearly Zero Energy Building (NZEB).

The image of the building has been conditioned by the proposed plan to build five towers in Salburua Avenue as a landmark in the city planning and as a response to the desire to identify different parts of the city in the growth process. In this case, they are not churches but social houses which rise above the average height of the city, being the expression for the welfare society and the engagement with citizens to the right of adequate housing regardless of economic status of the people who inhabit it.

The presented building occupies the central position of these five towers and it is meant as "a milestone in the landmark" with its red colour, which is intended to express optimism and confidence in a social and architectural context of predominantly grey colour.